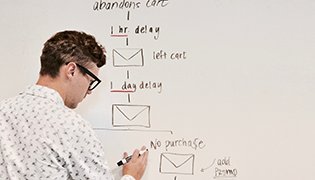 If companies in your vertical already use Artificial Intelligence (AI) and Machine Learning (ML) in their marketing, you’re probably noticing that those companies are becoming more successful. That means your competitive position is at risk. You need to make some moves, just to keep up. And if no one in your vertical has discovered the advantages of marketing with AI and ML, you have a great opportunity to forge a competitive advantage.

The more you learn about AI and ML, the more you will want to know which technologies your business would need to improve your marketing campaign options and decision-making capabilities.

This is an introduction to the AI-related marketing technology options available to you, and how they can help you minimize spending on your MarTech stack.

Continue reading or use the chapter links to skip ahead:

What Is a Technology Stack?

From a business perspective, a technology stack is all the different software each line of business uses. For example, a manufacturer might use one technology stack to stay on top of their supply chain and another for HR, and so on.

Marketing is a broad field, and every aspect is aided by technology, so the stack that provides the software infrastructure for marketing activities can be very large. In 2018 there were 7,000 different vendors offering MarTech. Unlike what Adobe Creative Suite does for creatives and Microsoft Office does for many office functions, there is no such thing as a MarTech bundle that provides all the tools you need.

According to Gartner, marketing technology consumed 29 percent of the average marketing budget in 2018 (up from 22 percent in 2017) and was the #1 marketing expense. But companies don’t have to spend that great a portion of their AI-related marketing dollars on technology. That’s because some of the best marketing tools are available as free open source software.

What Is Open Source Software?

Open source refers to source code, the foundational code on which software is built. Many software companies make their original source code available as open source. According to opensource.org, open source software is free under a license that does not restrict how anyone uses the code, as long as they don’t discriminate against people, groups or fields of endeavor. Giving away the source code makes good software popular and creates opportunities for other developers to add features and resell the code as part of a commercial software product.

Licensors of open source code package their own version of the software and license it for a fee. So, open source software can be offered as both non-commercial (in the original open source version) and commercial (upon adding other elements).

Linux is an example of a company that made its source code available at no charge and also created products with the source code as the foundation of those products. Eventually, both the non-commercial and commercial sides of Linux were sold for more than a billion dollars each.

Companies can pay for a commercial license of the modified software or use the free non-commercial version of the open source code. But the open source code is generally not as user friendly. It usually requires a business worker who  is going to be able to load and work with it, as is, to have some technical inclination. Alternatively, they need the help of someone experienced with the software to configure and adapt it to the particular needs of their business.

For some companies, licensing the commercial version might make the most sense, while for those that are going to bring in experts to work with the software anyway, licensing the free open source code saves money and time.

SMBs and mid-market companies that are building a marketing technology stack often find that free open source software operated by data engineers and data scientists under contract is the most cost-effective way to go.

These seven types of technology all have a place in the AI-related portion of a marketing technology stack. That doesn’t mean that you need all seven of them. Each company’s needs are different. Also, some solutions provide more than one technology. The following descriptions are to help you understand what the technology does. This is meant to be a helpful guide, not a shopping list.

The takeaway here is that before you can analyze data from different sources efficiently, you have to bring it together in one file. Setup and implementation of all stages of the integration are done by data wranglers, so integration is also known as data wrangling.

Once the data is transformed it is loaded to the target file. At that point it is ready for use in Business Intelligence and Analysis software that incorporates Artificial Intelligence and Machine Learning.

Some of the solutions that perform data integration also provide data visualization and/or data analytics tools.

An automated email marketing platform monitors individual customer behavior from a variety of sources, including:

The platform uses rules you create to score the value of every customer for which you have an email address. The platform automatically sends the correct email campaigns to the customer based on their score, what products and offers interest them most and the email preferences they have selected.

The customer data platform (CDP) is the single most important tool for developing a single customer view (SCV) of each customer. With an SCV you don’t have to search through your CRM, online purchases, in-store purchases, credit card records and other databases to see everything you need to see about a customer. Instead, the CDP brings all that information together and creates the SCV as a single source of truth for each customer — also known as a Golden Record — which can be customized and shared with each marketing unit.

With a CDP, you can make sure your customer data is clean and that all duplicates have been removed. Poor data quality is a huge barrier for marketers. It costs US companies billions of dollars a year in marketing ineffectiveness. Sending multiple offers to the same customer due to duplicate records creates a poor customer experience and hurts the brand.

The CDP makes it possible for businesses to efficiently and effectively market directly to customers.

Once the processing of a single batch is complete you can process the next batch. Eventually, you end up having to aggregate data across multiple batches. You also have to store all the batches to have access to the data you need. If you are batch processing a lot of data you end up with a lot of data in storage, much of which will never be useful.

Stream processing analyzes data in real time, as it is streamed. Because no batch needs to be created, any irrelevant data can be discarded, putting a lot less stress on the system.

Online activity and internet of things (IoT) are two sources of data that are handled far more effectively with stream processing because they have no natural stopping points.

Stream processing allows businesses to analyze activities in progress rather than waiting for batch reports, which are always historical in nature. Real-time analytics helps uncover potential problems while there is still time to do something about them, Similarly, it uncovers opportunities at the earliest possible point of discovery, enabling businesses to get a head start on new products and processes.

BI came along first, converting data into dashboards and visualizations that present an operational view that is both comprehensive and easy to understand. Dashboards can be customized for different lines of business. Permissions determine what information is available to each worker/manager/executive. A salesperson’s dashboard might give that salesperson an accurate view of how they are doing, while the sales manager’s dashboard will report on all salespersons and allow the manager to dig deep into the data for more granular reporting.

Some BI platforms include the ETL tools needed to integrate data.

BA doesn’t just report the data, but uses Artificial Intelligence and Machine Learning to analyze it, generate data models that predict future outcomes and surface the models with the best predicted outcomes. BA is a system for proactively using data to improve decision making.

Purchasing a legacy BI platform that does not include BA is a half measure that will need to be corrected in very short time — as soon as you realize what you’re missing. A comprehensive platform will include ETL, BI and BA.

Machine Learning (ML) is a subset of Artificial Intelligence (AI).

ML takes action on specific tasks without needing to be told explicitly to do so. It does that by studying algorithms and statistical models ML recognizes patterns and inferences in sample data and uses them to teach the machine how to handle new data.

Machine learning has become a part of everyday life in so many ways that we tend to not even recognize ML when we make use of it. Here are three examples.

For companies with a sufficient number of customer records, ML generates and analyzes hundreds of models based on existing data to tell direct marketers which customers:

But Google Analytics isn’t perfect. Here are three reasons why it might not be your best choice.

Those first two items may not be an obstacle for your organization. But some companies benefit from leveraging the additional features that other web analytics software provides. For example:

In addition to advanced features, some Google Analytics alternatives provide the means to integrate your web analytics data into your organizations CRM, forums, photo galleries, webmail and more.

Approaching your marketing technology stack strategically saves a lot of headaches in the long run. Even if you can’t implement it all at once, a strategy that envisions the technologies you will need and how they will work together enables you to develop a phase-in plan for all the different elements.

By strategically customizing your marketing technology stack you eliminate the roadblocks that can set you back if you take a piecemeal approach. include:

Designing your customized MarTech stack from the beginning is the only way to go.

The above seven descriptions should give you a good sense of what software does in an AI-related MarTech stack. Here are a few more technologies to consider, along with links to Xperra-tested tools.